Posted on Published: May 21, 2021 Categories Fruit

Can dogs eat applesauce? Find out if it’s ok to give your dog this jarred fruit in both unsweetened and sweetened forms to your dog.

Wondering if the “apple a day…” saying applies to your dog?

Well, while you may not want to give your dog an entire apple every single day, apples and applesauce are definitely a dog friendly food.

Apples are one of the many fruits that can be a nutritious addition to our dog’s diet.

We’ve all heard about apple seeds containing cyanide and while that’s true, the amount that it takes for it to be toxic isn’t really of concern if your dog were to eat an entire apple.

That said, avoid giving your dog a whole apple as the core and stem can be a choking hazard especially for smaller breeds.

HEALTH BENEFITS OF APPLESAUCE FOR YOUR DOG

Since applesauce is just pureed apples, all the same nutritional information applies.

Apples are high in vitamin C, vitamin A and dietary fiber. They also have a good amount of calcium and phosphorous.

This makes applesauce a great fruit that can help in the promotion of strong bones, healthy joints and coat and of course all the immune boosting benefits of antioxidants.

IS APPLESAUCE GOOD FOR DOGS?

If you make your own applesauce with just apples this isn’t something you need to worry about. However, if you buy applesauce from the store be on the lookout for added ingredients.

It’s a shame really to think this is a food we often feed our children let alone our pets with the chemicals that can be added!

The other point of consideration with applesauce is whether it’s been made with organic apples.

Conventional apples are heavily sprayed with pesticides so it’s best to consume organic varieties. This is true for both humans and dogs.

HOW MUCH APPLESAUCE CAN I GIVE MY DOG?

Like most human foods and especially fruits when it comes to dogs, applesauce should be viewed as a “sometimes” treat.

It’s often times an ingredient in homemade dog biscuits like these homemade peanut butter dog biscuits in which case it’s fine to give once a day but on its own, a small spoonful in your dog’s food is plenty.

Pumpkin is another common ingredient in dog treats which is also safe for dogs to eat.

If you prefer to feed your dog the whole apple instead of applesauce, a slice or two is a good serving amount.

Dried apples that are simply just dehydrated apple slices are also ok to give your dog and can be substituted for “jerky” if desired.

Related – eggplant jerky for dogs and can dogs eat dates?

One of the more popular flavors or applesauce varieties is the cinnamon kind.

Cinnamon is safe for dogs to eat, we use it in our cinnamon turmeric roasted cauliflower recipe that’s dog friendly.

Be aware, however, that often times the cinnamon flavored applesauces tend to have added sugar as well which is unnecessary for your dog.

If you want to add cinnamon to homemade applesauce made purely from apples, a small amount can be stirred in.

CAN PUPPIES HAVE APPLESAUCE?

Puppies have undeveloped stomachs and digestive tracts so it’s best to avoid giving them applesauce or strictly limit their intake.

As with most foods, it’s a good idea to hold off on introducing applesauce until your dog has matured. 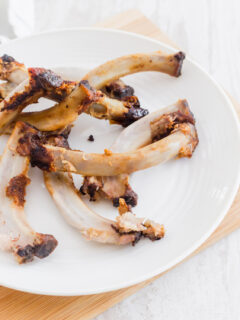 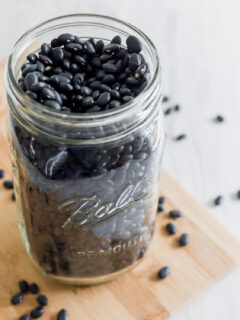