Posted on Published: May 4, 2021 Categories Recipes

Turmeric and cinnamon coat cauliflower in this easy roasted side dish recipe. It’s healthy, anti-inflammatory and can even be shared with your dog!

If you’re looking for an easy side dish look no further than this turmeric roasted cauliflower.

With a touch of cinnamon and salt it’s insanely simple yet packs a good dose of anti-inflammatory properties.

After making this creamy turmeric chicken and chickpea skillet for my “people food” site a few years back, I thought about how I could incorporate turmeric into an easy recipe for our dogs.

They too deserve all the health benefits of turmeric!

This simple roasted turmeric cauliflower was born and every one of our dogs, including our foster Molly (pictured below) has happily enjoyed a handful of florets straight off the baking sheet any time it’s offered.

If you’re wondering – can dogs have cauliflower? That article will tell you everything you need to know about the cruciferous vegetable and your dog.

The best part is, this recipe is equally delicious for humans as it is dogs. I might season one side of the baking tray a little heavier with salt and pepper for the humans than I would dogs but all in all, it’s suitable for both.

As a simple roasted vegetable recipe, there’s not much to this turmeric cauliflower!

As mentioned, the way you season this recipe for dogs is a little different than with humans.

For dogs, I go easy on the spices. Turmeric and cinnamon are both great anti-inflammatory spices that are safe for dogs but I never like to feed our dogs anything overly seasoned.

I’ll also go light on the salt, just enough to bring out the flavors.

For humans, however, I’d suggest doubling the spice amounts in the recipe below for optimal flavor.

Also, add a crack or two of black pepper to the cauliflower as curcumin, the active component in turmeric is more readily absorbed in the body with black pepper.

HOW TO MAKE TURMERIC ROASTED CAULIFLOWER

Toss the cauliflower florets with the avocado oil, turmeric, cinnamon and salt until evenly combined.

Spread out onto a large baking sheet and roast for about 25 minutes tossing once or twice throughout the cooking time.

Cauliflower will be tender with slightly golden brown edges when it’s finished roasting.

Let cool for a few minutes before serving.

We give the pups a few florets each usually as a snack or treat. Sometimes, if dinner time aligns, we’ll throw them on top of their regular food in their bowls. Either way, never as a hand out straight from the kitchen. No beggars here!

As a cruciferous vegetable, cauliflower is high in sulforaphane which greatly supports the body’s natural detoxification pathways.

This applies to dogs just as much as humans.

There’s no reason not to indulge in this veggie!

And since it’s on the list of dog friendly vegetables, everyone in the house can enjoy this recipe!

As a fun “hack” if you will, another way to enjoy this recipe is to process the cauliflower into turmeric cauliflower rice after it’s roasted.

It takes riced cauliflower to the next level and makes for a much more tasty base to any sort of “bowl”.

And if you’re using this recipe for you dog, riced cauliflower mixes in much more easily with dog food than whole florets so it’s a good option for the pickier canines who like to eat around anything unusual added to their bowl. 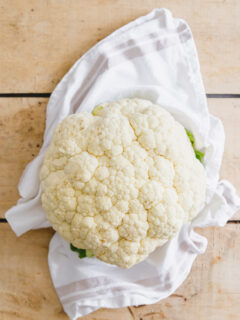 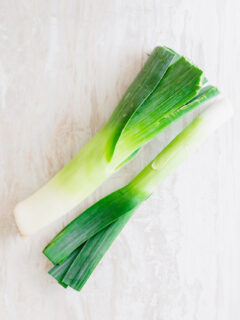 Next
Can Dogs Eat Leeks?
Click here to cancel reply.

Simple, delicious and everyone loves this recipe!