As fall approaches and cans of pumpkin start to come out of the depths of the pantry, you may be wondering if your dog can eat pumpkin safely as part of their diet.

Good news – pumpkin, both canned in pureed form, as the squash itself and the pumpkin seeds are not only a safe food for dogs but can also be a highly nutritious addition to their diet.

If your dog has ever had an upset stomach (and let’s be honest, what dog out there hasn’t at some point?), you’ve likely been told to add some pumpkin to their diet.

And probably rice too if not both at the same time!

Pumpkin, has a blend of both soluble and insoluble fiber making it a unique food that can both aid in constipation as well as diarrhea. It’s kind of a magic pill in the form of whole food!

So not only is pumpkin safe to feed to your dog, it can be a helpful ingredient for digestive woes as well as a nutritious one.

Besides its inherent fiber, pumpkin is a low calorie, low sodium squash with high amounts of beta-carotene, a type of antioxidant.

It’s also packed with vitamin C and potassium like many other vegetables such as beets as well as zinc and magnesium.

If you read can dogs eat pumpkin seeds? you also already know that the seeds in particular can be used as an anti-parasitic and natural de-wormer for dogs.

Pumpkin is quite the superstar when it comes canine health!

Let’s not get carried away now.

Just because pumpkin can be a healthy part of a dog’s diet doesn’t mean a dessert typically filled with sugar, butter and milk – all things dogs should generally avoid is also good for them.

If it wasn’t already common sense, dogs should not eat pumpkin pie.

Stick to unadulterated pumpkin or canned pumpkin puree if you want your dog to reap the nutritional benefits of the fall squash.

And make sure you’re not buying “pumpkin pie filling” when looking for canned pumpkin puree. The two are usually sold side by side but not the same.

Raw pumpkin is also completely safe for dogs to consume.

That said, your dog will likely enjoy it more after it’s cooked whether that’s in pureed form from a can (or homemade), roasted or steamed.

Some raw vegetables tend to be hard on digestion for both humans and dogs (like Brussels sprouts) but pumpkin isn’t one of them.

Dogs can tolerate raw pumpkin just fine so if you’re carving some with the family, don’t hesitate to give them a snack of the scooped out pulp or seeds.

HOW TO FEED DOGS PUMPKIN

Now that you know dogs can eat pumpkin, you may be wondering what’s the best way to incorporate pumpkin into your dog’s diet.

Here are a few easy ideas to consider:

Like applesauce, pumpkin is often used in dog treat recipes as a swap for typical fats such as oils or butter just like it is in treats for humans.

These pumpkin dog treats are a simple recipe that uses pumpkin puree, peanut butter and banana – all things dogs love! 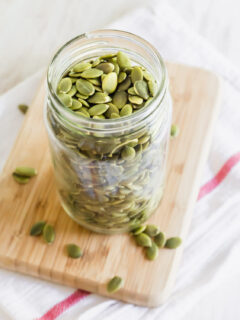