Posted on Published: May 31, 2021 Categories Vegetables

In moderation, eggplant can be a safe food to feed most dogs. Find out the benefits and risks of eggplant in a dog’s diet along with the best ways to serve it.

Maybe you’re making eggplant for dinner and wondering if this vegetable is safe to feed to the dog.

The quick answer is: yes, dogs can eat eggplant.

However, unlike some more all-around friendly vegetables like cauliflower and parsnips, there are a few cautions to consider before handing over some cooked or raw eggplant to your dog.

IS EGGPLANT HEALTHY FOR DOGS?

Eggplant is in a category called nightshades. It includes foods like potatoes, tomatoes and peppers among others and while a non-issue for most, nightshades can be triggering for those with autoimmune conditions, canines included.

If your dog happens to have an autoimmune issue, arthritis or a history of sensitivities with nightshade vegetables, eggplant should be avoided.

For all others, eggplant can be a healthy part of a dog’s diet.

It’s high in fiber and antioxidants along with nutrients like manganese. The vibrant purple color of eggplant is due to a pigment with antioxidant properties called anthocyanin.

A specific anthocyanin called nasunin has shown through lab testing to be particularly beneficial towards fighting free radicals. (source)

Eggplant is low in calories and so its addition to your dog’s diet can be a welcome one.

WILL EGGPLANT MAKE MY DOG SICK?

Some dogs have allergies to nightshade vegetables. If so, it’s possible your dog may react to eggplant in any form.

Signs to look out for include itchiness, swelling around the face, vomiting, rash or an upset stomach. Contact your vet should any of these occur after feeding your dog eggplant.

Eggplant is also higher in oxalates than other vegetables and as such should be avoided in dogs with kidney conditions. Oxalates block the absorption of calcium in the bloodstream and can therefore lead to kidney stones.

This isn’t an issue for healthy dogs as the nutritious properties of most high oxalate vegetables far outweigh the potential oxalate issues but in compromised health situations such as kidney disease or other inflammatory conditions like arthritis, it’s best to avoid eggplant altogether.

Other high oxalate vegetables to be aware of include spinach, potatoes, beets, raspberries and dates.

HOW TO FEED EGGPLANT TO YOUR DOG

Some dogs love any and all human food in any shape or form. Those types will probably happily eat some raw eggplant straight out of your hand.

And while raw eggplant is perfectly safe for dogs to eat, most will prefer it cooked.

There are many ways to feed your dog cooked eggplant. Some favorites include: grilling, baking and roasting.

As humans, the most popular way to eat eggplant is probably fried in the form of eggplant parmesan. That, however, is not the way in which your dog should be fed eggplant.

Hopefully it’s obvious but the copious amounts of oil (fat) and cheese in eggplant parm is something that has no place in a dog’s diet.

When cooking eggplant for your dog, use as little added fat as possible and dog-friendly spices (if any at all).

One way we love to enjoy this vegetable in our house is air fryer eggplant. The result is incredibly flavorful crispy cubes of eggplant that go great with many main dishes. If you have an air fryer, the recipe can easily be tailored for your dog as well by modifying the seasonings (omit garlic, paprika and reduce salt).

The other way our dogs love to enjoy eggplant is our eggplant jerky recipe. There are methods for both the oven and an air fryer and it’s a great healthy treat for your dog to enjoy! 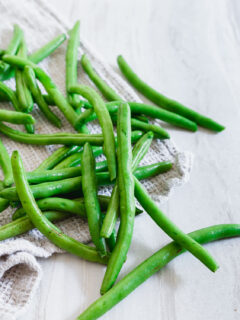 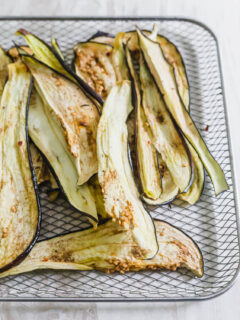