Cucumbers are a safe vegetable to feed your dog and make a great low-calorie snack for any hungry beggars in the kitchen.

Learn about the health benefits of cucumbers, if they should be peeled before sharing with your pup and some serving ideas.

If your dogs are anything like ours, they come running at the first sound of anything chopping on the cutting board.

I’ve never met anyone as excited for a carrot or cucumber before as a dog!

So, if you’re wondering if it’s safe to share this refreshing crunchy vegetable (much like fennel) with your pup, the answer is, yes!

Cucumbers are a non-toxic, healthy vegetable canines can eat.

That said, not all of them will be like our dogs and love the taste of raw, relatively bland cucumbers but for those that do, you can feel safe sharing!

ARE CUCUMBERS HEALTHY FOR DOGS?

Cucumbers are a low-calorie vegetable that have long garnered the attention of any dieting human. As mostly, water (96% in fact), one can eat a large quantity of cucumbers without much caloric impact.

When it comes to dogs, the same applies.

Cucumbers are a great option for dogs that love to snack. Compared to a commercially produced dog treat or biscuit, dogs can eat quite a few cucumbers for the same amount of calories.

This doesn’t mean, however, your dog should have unlimited access to cucumbers (or any human food).

Overeating is actually one of the potential downsides of feeding your dog cucumbers. The other being the potential for choking on small pieces, especially for smaller breeds.

In addition to their low calorie profile, cucumbers also contain vitamin C and K as well as potassium and magnesium, all of which are healthy components for a dog’s diet.

The cucumber peel and seeds can sometimes upset a dog’s stomach so it’s best to peel the cucumber before feeding to your dog.

That said, there are many cucumber varieties with differing thicknesses of peels. A regular cucumber with a thicker skin may be best peeled but it might not be necessary for a variety like the English cucumber shown here with its incredibly thin skin.

If your dog does eat the skin of a cucumber, it’s not a big deal. Chances are likely there won’t be any issues but if your dog has a sensitive stomach or ingests a very large quantity, be on the lookout for potential stomach upset signs.

Pickles, however, usually have additional spices like peppercorns, garlic, herbs and salt to name just a few. For this reason, it’s best to skip giving your dog pickles and stick to just raw cucumbers instead.

HOW TO SERVE CUCUMBERS TO DOGS

Since cucumbers are mostly water, they’re actually quite a refreshing and hydrating treat for dogs. Some ways your pup might enjoy eating cucumbers are:

As always, keep your dog’s diet limited to just about 10% of calories coming from foods outside their normal meals.

For a large breed dog this can mean a cup or so of cucumbers while a smaller breed may only get a spear to snack on. 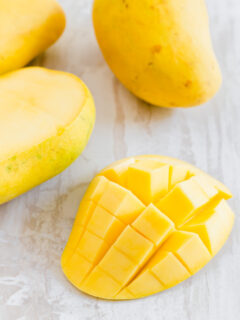 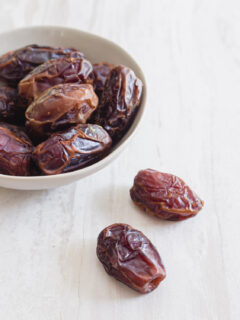 Next
Can Dogs Eat Dates?
Click here to cancel reply.